A capture card is a device that captures video footage from different sources like a PS4, PC, Wii, or Xbox. It has many uses but for most, it is used to record high definition videos of gameplay that can be later on streamed on a Twitch or YouTube channel.  A capture card is very handy since it gives a user the freedom to edit video footage of a gameplay which is one of the necessary steps when establishing a professional social media channel. A capture card gives the gamer flexibility that helps him create amazing gaming videos and without having interruptions.

For a beginner YouTuber who is new to the scene, a capture card is one important tool that he needs to consider getting when preparing a video game channel with the purpose of profit gaining. It is a helpful device that will help capture video recordings of gameplay and later on to be uploaded on different social media platforms such as Twitch, Ustream, or YouTube. For the viewers, the video output is very important considering the technology we have nowadays. Having to enjoy and watch a high definition video of a favorite game is really popular. 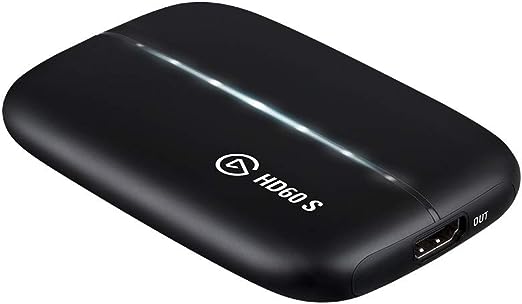 The Elgato Game Capture HD60 is definitely one of the most well-known capture cards in the market. This device is one of the easiest to use. It able to capture full HD videos and usually at 30 or 60 fps and it can be used for high-quality video recordings like for example gameplay of the newest released games on the market. It is compatible with different consoles and systems and can be easily streamed on different channels such as Twitch, YouTube, and Ustream.

The Elgato has different features; one of them is the Flashback recording. The capture card is always recording a short video of the material and it comes in handy when there is a cool battle or difficult level that suddenly needs to be recorded, with the Flashback recording feature, there will be footage that can be accessed anytime you want it. It also has a Stream Command feature, this feature allows to add a webcam or camera that can be overlaid on top of the video footage. It also allows the user to record a commentary over a previously recorded video footage. However the commentary cannot be edited with the software, so make sure to plan the commentary to prevent mistakes from happening. An external software editor is needed to edit the video footage and audio.

Flashback recording feature and the stream command feature is a handy feature when recording video gameplay. The video output is 1080p60 and the feature ultra-low latency allows interacting with the audience during live streaming. It has a sturdy and durable design and allows customization. The encoder has a feature that saves storage space and at the same time preserves the video output quality.

The Elgato has a limited built-in editing; the user will need external video editing software to edit audio or video outputs. Some users find out that the audio output is not working and sounds garbled and stutters from time to time. 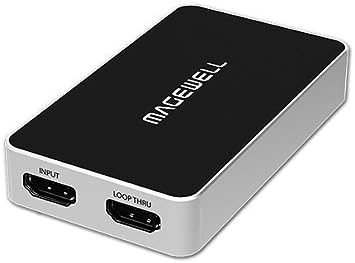 Magewell USB Capture HDMI Plus
$359.00
Buy Now
We earn a commission if you make a purchase, at no additional cost to you.

This device is easy to use, plug it and it will play, without any confusion or messy installation instructions. It can capture videos from cameras and video consoles.

Video output is 4k at 60 Hz. It automatically downscale video outputs to 1080p and it features a separate microphone and headphone jacks. Easy to use, just plug and play and it will work accordingly. Handy, lightweight and can fit inside a bag when traveling.

Overpriced compared to some of its competitors in the market. Sometimes the USB 3.0 does not work and is not compatible with PC. Video quality is not as good as the other capture cards in the market. A user will need external video editing software to edit video outputs. It does not come with an HDMI cable. 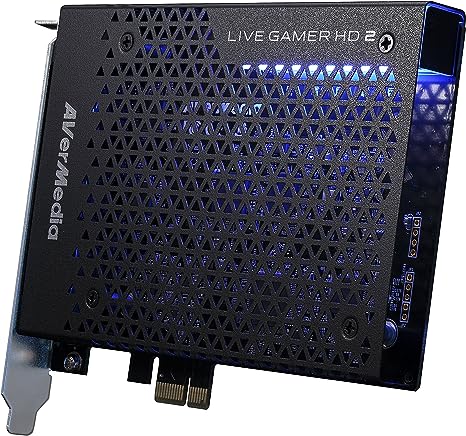 This capture card is compatible with different consoles and the video output is in full HD 1080p60. This capture card uses the USB interface. It is easy to use just plug and play. It supports multi-card support and can use up to 4 cards at the same time. It allows live editing and has customizable features.

It offers a 2-year warranty after registration on the website, compatible with different consoles and systems. Plug and play installation process. It supports up to 4 cards simultaneously. RECentral 3 software allows capturing and streaming video simultaneously. It can support video platforms like OBS, can record videos into a MicroSD card, and can record high-quality videos. It is light and compact, easy to carry when traveling.

It has audio and video issues during recording. Have poor customer service and support. Build quality needs improvement. 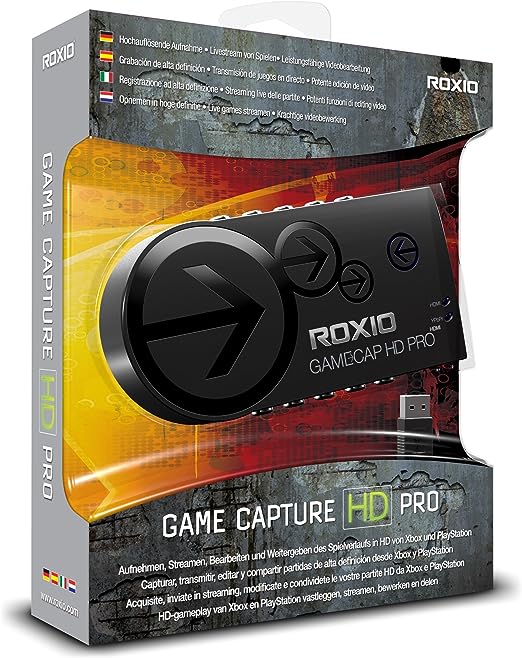 Roxio Game Capture HD PRO Video Capture Device and Editing Software for PC
$47.99
Buy Now
We earn a commission if you make a purchase, at no additional cost to you.

This capture card is easy to install and utilize. It is easy to use; it is able to capture video game footage in HD. It also allows sharing and streaming while giving commentary.

It is affordable and easy to use. It has a voice changer feature. Share videos on YouTube or Twitch easily while capturing HD videos at the same time. It is lightweight and easy to transport.

HDMI cable does not come inside the box. Hardware is unreliable, sometimes it works other times it does not. 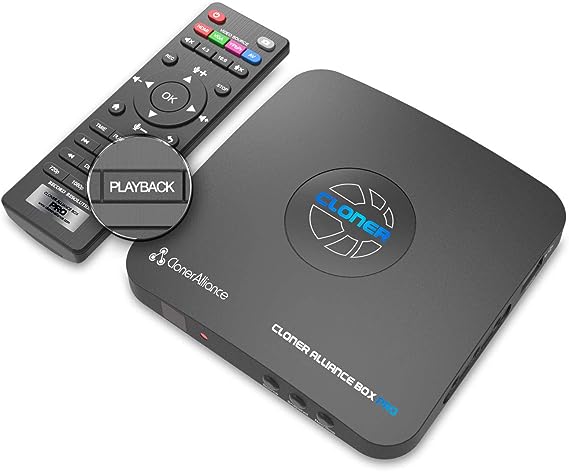 HDML-Cloner Box Pro, Capture 1080p HDMI Videos/Games and Play Back Instantly with The Remote Control, Schedule Recording, HDMI/VGA/AV/YPbPr Input. No PC Required.
$179.90
Buy Now
We earn a commission if you make a purchase, at no additional cost to you.

This capture card is the advanced version of HDML cloner Box. It can record Full HD videos from different sources such as video game consoles, network videos, or video discs. It comes with video and editing software. It has a feature that allows scheduled recording. It supports AV, HDMI, VGA, and YPbPr input signals. The recorded videos can be playback by using the remote control.

It can be used as an alternative to a DVR, network videos can be recorded directly to the PC. It saves videos as MP4 files to an external hard drive or USB storage devices and does not require a PC to do so. It supports 4k video input. With just one click you can save a screenshot. It captures video game play in 1080p Full HD output. It also supports live video streaming in different platforms.

It has too many issues and sometimes unresponsive. USB is not detected at times.

How much are you willing to pay for a hardware device like a capture card? It all depends on the quality and the frequency of use for the device. If the reason for buying the hardware is for a few occasional video recordings of gameplay then there will be no need to buy an extravagant capture card. Professionals, however, need to invest their money in a top-notch quality of hardware in order to produce high-quality videos. There are capture cards that produce excellent quality but do not cost too much, it is important to read reviews about different products before purchasing one.

Is the device easy to use? The best capture card comes with a variety of features that helps the user understand how it works. Always make sure to research and read about the device, read the manual cards and check the website for the capture card to learn more about it. A capture card that is user-friendly and easy to use is the best for beginners and even professionals alike.

Before rushing and buying a hardware device, make sure that it is compatible with the system you are using and whether if you have everything that is needed in order for it to function and fully work without any complications. The hardware must be supported for it to function with the console or system without causing any complication or problems.

The quality output of the video is one of the important aspects one must consider when buying a capture card. The best capture card must provide rich video and high-quality outputs and the frame rate must also be high. A capture card varies on the ability to record a video quality; some can only record 720p HD, 1080p Full HD, or 4K Ultra HD. It all depends on the usage for the capture card, professionals usually use the best video quality, which is 4k Ultra HD and it is also more expensive compared to the other capture cards in the market. Usually, a powerful system is compatible and it is able to use 4k resolution level capture cards.

When buying a capture card, one must also consider the console or system he is using. There are specifications that are qualified depending on the console that will be used. PS4 and other consoles in the market use HDMI transfers. Make sure to buy the right hardware that will also be supported by the system you are using. The capture card must be compatible with the hardware factors of the console like the storage, memory, and speed. Capture cards must be bought from legit manufacturers that will provide the user with customer service and help via manuals and tutorials provided on the website.