Planning to buy a new GPU for your computer? Are you eyeing to acquire the best GTX 1080 with superb cooling, exceptional overclock capacity, affordable price, and excellent after-sales support? Sounds easy but in truth, it’s actually a demanding, time-consuming, and confusing endeavor. To put it simply: there are just a hundred of GTX 1080s out there.

For once in a lifetime, it was easy to buy a graphics card. The decision was either NVidia GeForce or ATI Radeon. The two huge GPU designers and manufacturers were NVidia and AMD, so it was easy to narrow down which brand to buy. And if you’re inclined to pick up an NVidia GeForce, you’ll most likely be offered choices of the different models within the NVidia GeForce range.

However, NVidia made a very wise business decision to focus on the design and innovation of their ever-powerful GPUs and let other technology manufacturers get in on the manufacturing and build of their NVidia GeForce GPUs, the whole market was suddenly filled with a thousand of NVidia GeForce GPUs with similar and/or the same specifications, purpose, and performance. The only difference is that they’re made by many different manufacturers. That’s where the tedious task of decision-making comes to play. It’s like choosing which is the best Android phone among an ocean of mobile phone manufacturers, ie: Samsung, Vivo, Huawei, ASUS, Lenovo, Oppo, LG, Google, OnePlus, and the list goes on.

Today, we have many different NVidia GeForce GTX 1080 manufacturers, among them is NVidia of course, but there are heavyweights in the arena, such as ASUS, EVGA, MSI, Gigabyte, and ZOTAC. Each version of GTX 1080 from these different manufacturers have the same fundamental GPU design and specifications albeit with added manufacturer-imposed enhancements, innovation, technology, and build approach. And since the GTX 1080 is NVidia’s latest line of cutting-edge GeForce GPUs, you’ll be right to expect the best components, most excellent performance, and superb GPU built from these other manufacturers.

The whole process is going to be painful, mind you. There’s a lot of variations of GTX 1080s out there and it’s easy to fall trap into headliner features that in the end maybe just the only things the hardware could offer. It’s not only daunting but it’s also going to cost you a ton of money if you buy the wrong product. Not to mention the whole emotional stress you’ll have to go through after knowing that you’ve bought the wrong GTX 1080 for your machine.

That being said, we have put together the best GTX 1080 to help you narrow down your decision and ultimate buy. We’ve pretty much thought of saving you, dear reader, from a suicidal nervous breakdown due to a wrong decision that’s why we made this list. Pun aside, our list should help cut adequate amount of research time on your part, so you can focus on the most important features and understand inherent drawbacks and potential limitations of each of the models in our list. We’ve carefully tested and enjoyed these GTX 1080s, which we are now recommending to you. Here’s our most recommended GTX 1080 of the year 2019. 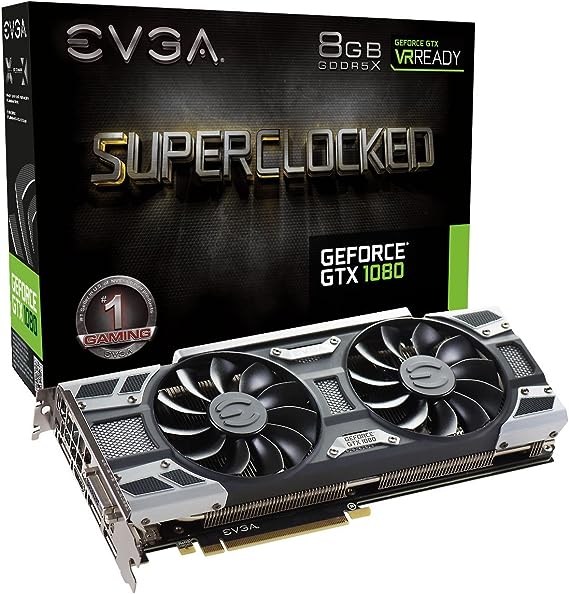 Badass! That’s the first impression you’re going to have with that bold, solid, ‘SUPERCLOCKED’ headliner you’ll see in the packaging of EVGA’s take on the GTX 1080. EVGA is known in the world of computer and electronic hardware. This USA-based company is one of the huge manufacturers in the computing industry. Founded in 1999, it has grown exponentially and established its reputation quickly. Their portfolio includes a wide range of computer components, ranging from cooling solutions, computer cases, motherboards, power supplies, laptops, video cards, and so much more. They joined in on the GeForce manufacturing bandwagon with the release of the GeForce 6 series as far back as 2004. EVGA has developed an iron-strong relationship with NVidia over the years. EVGA has been known to manufacture the best GTX 1080s out in the market today.

EVGA released its EVGA GeForce GTX 1080 SC Gaming GPU recently with a lot of promises. This new GTX 1080 is full of innovation from the original GTX 1080. It’s going to impress you first with its style and power. The next will be pure hardware extravaganza!

The GTX 1080 SC Gaming GPU features an open-air cooling system – a brave getaway from NVidia’s template ‘blower’ fan. EVGA explained that their open-air cooling system method provides power-efficient cooling and is also quiet. Which, true to the claim, the GTX 1080 SC Gaming GPU delivers with applaudable consistency. It is efficiency is far better than the ‘blower’ fan and it’s a lot quieter. It is by far one of its greatest features. And, there’s a huge reason behind that.

At a quick glance, you’ll be astounded by the 1847 MHz GPU clock speed boost that the EVGA GeForce GTX 1080 SC Gaming can deliver. There’s no wonder why EVGA invested so much, let alone highlight, the cooling system in this GTX 1080. The clock speed undeniably beats any in our list of the best GTX 1080s just easily.

And now, the GeForce GTX 1080 SC Gaming’s most impressive features will barrage you with some of the industry’s amazing hardware builds:

On top of that, EVGA complemented the overkill hardware with their truly impressive PrecisionXOC software, which enables precise and smart auto-overclocking. It is diligently designed specifically for the Pascal architecture. This software comes in handy and helps you get everything from this GPU.

The EVGA GeForce GTX 1080 SC Gaming practically has zero drawback, except maybe for the software. That doesn’t mean that the software is no good, it’s just the whole GUI and navigation of the PrecisionXOC is a bit cluttered and cramped. Nevertheless, it remains to be one of the most useful and powerful GPU software around. You just need to get familiar and comfortable with its navigation and use.

The epitome of GPU power and style 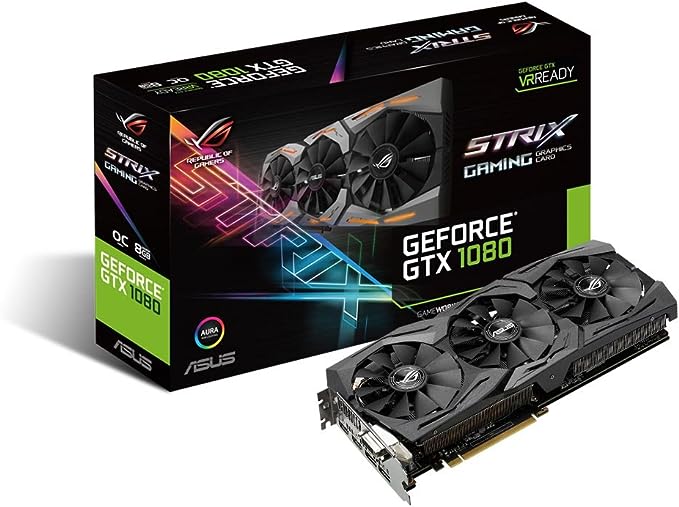 ASUS GeForce GTX 1080 8GB ROG Strix OC Edition Graphic Card STRIX-GTX1080-O8G-GAMING
$448.99
Buy Now
We earn a commission if you make a purchase, at no additional cost to you.

ASUS is a titan in the IT industry. The Taiwan-based company continues to be a giant in the computing world since its humble beginnings in 1989. They were first known for their reliable motherboards and subsequently made their big stamps on to other electronic products. Today, you’ll see ASUS computers or laptops, mobile phones and smartphones, computer components, smart-watch, and so much more. The ASUS brand is one of the most recognizable electronics brands in the world that has become trusted by consumers. They made an impact in the GPU world through their STRIX series of GPUs. Their partnership with NVidia as well as AMD produced some of the best GeForce and Radeon video cards in the market through their STRIX stamp. ASUS GeForce GTX 1080 GPUs are one of the highest rated GPUs in the marketplace nowadays. And today, we’re just about to feature their ASUS GeForce GTX 1080 8GB ROG STRIX.

ASUS released its powerhouse of a GTX 1080 keeping its Republic of Gamers brand for the GeForce GTX 1080 8GB ROG STRIX. It remains dedicated to its goal of delivering a GTX 1080 with the highest performance. And ASUS always delivers. The GeForce GTX 1080 8GB ROG STRIX will wow you with its remarkable 3-fan setup. But, to make things a lot more crazy and wild, ASUS designed this GTX 1080 GPU with a monstrous overclocking capability of up to 1822 MHz boost clock – it’s not even the GPU’s absolute limit!

That’s one awesome thing to get the party started. And to keep it going? Well, ASUS has lined up some of the best features in a GTX 1080, such as the following:

What else can you ask for when you are already got both power and style in a GTX 1080? Almost nothing, right? So, what are the downsides of the GeForce GTX 1080 8GB ROG STRIX? Well, it’s not so much of a downside but some people would find how the hardware is tied too much with the software a little uneasy and a bit of a limitation. Tendency is, and this is more of a rare case scenario, FPS drops and occurrences of lag spikes manifest during online matches. Another thing that might be a bit of comfortability issue is the noise problem when the GPU is used at its maximum capacity. Considering this GTX 1080 is very powerful, the noise issue can’t simply be taken out of the equation.

Another titan in the IT industry, MSI is world-renowned for its motherboards. It has built a solid reputation for producing some of the best motherboards in the world. Since 1986, this Taiwanese company has not stopped capturing the hearts of many computer users, technicians, and enthusiasts around the world with its excellent product quality. Aside from motherboards, MSI has a solid name in the desktops, laptops, peripherals, monitors, and accessories markets. They even produce GPUs for both AMD and NVidia. Their series of GTX 1080s cover more than a dozen versions. The technology they apply to their GTX 1080s varies from utilizing cooling systems, such as water-cooling, blower, and open-air. In our particular list today, we’re covering MSI’s awesome and best-selling MSI GeForce GTX 1080 Gaming X.

At first look, the GPU might look like a regular GPU that is loud enough to be easily identified as a GPU. It still offers LED lights like its ASUS counterparts. However, the overall aesthetic is just meh. However, that’s not really MSI’s greatest asset and the GeForce GTX 1080 Gaming X will get your attention through its interesting features. To start with, the GeForce GTX 1080 Gaming X has two Torx 2.0 fans – a patented design by MSI that accelerates airflow and increases air pressure. To complement the dual-fans, MSI employed a double ball bearing system to significantly prolong the lifespan of the fans.

Other features of the GeForce GTX 1080 Gaming X are the following:

While the clock speed of this GPU will not really impress you as it fares much lower than the other two in our list. There’s actually a very good reason behind that. The cooling system is not an overkill just like the other two. In a way, MSI made a wise decision in that aspect. It might also look cheap, considering the lacking aesthetics appeal, but it’s not. It’s still solidly built. Ultimately, the MSI GeForce GTX 1080 Gaming X remains to be the best GTX 1080, especially for SLI (Scalable Link Interface), when push comes to shove.

Behold, the most powerful GTX 1080 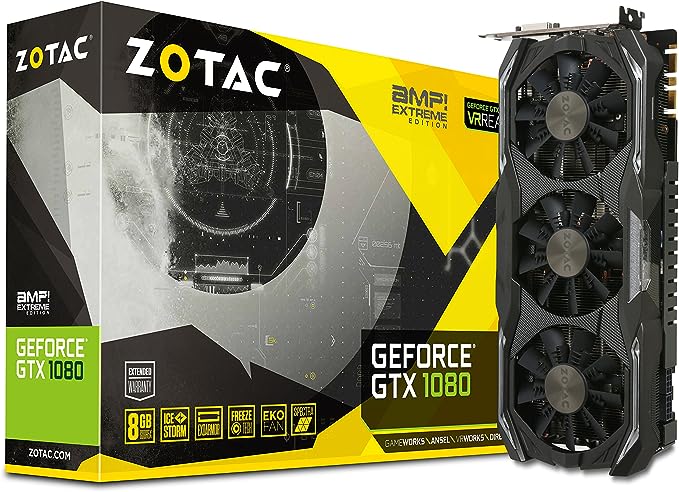 ZOTAC is based in Hong Kong. It might not ring a bell compared to an ASUS or an MSI but ZOTAC is quite a name in the SSDs, Mini PCs, and other computer accessories market. It was founded in 2006 and has established a really great and long-standing relationship with NVidia. ZOTAC is behind the GeForce GTX 1080 AMP! Extreme, which we are going to talk a bit more in detail today.

The simple and minimalist but quite sleek design of the AMP! Extreme’s exterior is amplified by a vibrant yellow are being sported by this GTX 1080. This is common with ZOTAC products. You’ll find the customizable LED lights really perfect with the GPU’s built-in color design.

ZOTAC employed a triple-fan system setup for the AMP! Extreme and equipped it with their advanced cooling technology called Icestorm. The combination is a perfectly efficient cooling and amazingly quiet performance. In addition, the GPU’s carbon construction, specifically the front and back, provides great heat dissipation and noise reduction. Not to mention it’s fantastic impact on the overall aesthetics of the card.

The ZOTAC GeForce GTX 1080 AMP! Extreme can be summarized into two major features, which are:

The only major downside of the AMP! Extreme is the little breathing room between heatsinks when paired with SLIs. The effect is a negative impact on the cooling efficiency, especially during overclocking. That might sound worse but it’s actually not. Just something to be aware to understand some potential effects on the cooling and performance.